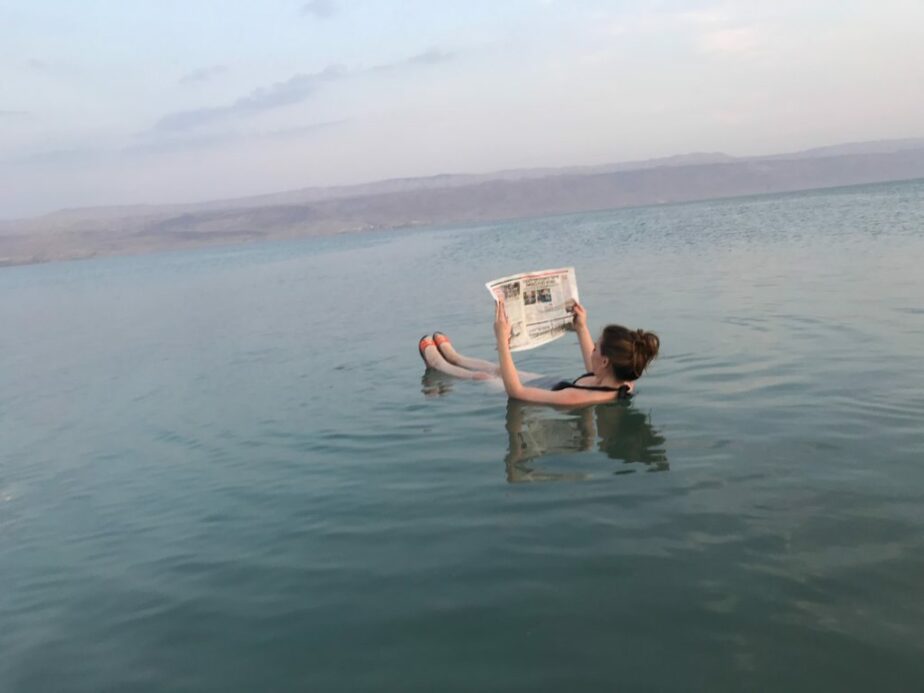 As a trained geographer, I have a soft spot for geographical phenomena. Whenever I come across them along my way, I am irresistibly drawn there. So it happened that I not only visited the lowest point on the earth’s surface (the Dead Sea, 430 m below sea level). But I’ve also been to the world’s third deepest depression in the Takla Makan Desert in Xinjiang/China. Which is not far from a point near Urumqi that boasts the longest distance from the sea on this planet by the way – 2.400 km. The fact that I also paid a visit to the deepest depression in North America (Badwater in Death Valley, a paltry 86 m below sea level) should only be mentioned in passing.

However, the deepest point on the earth’s surface was not the most impressive, because the Dead Sea looked quite acceptable (a lot of beach tourism). As is the custom there, I lay flat on the water and read my newspaper. I was more than happy when my girlfriend

had finished the compulsory photo. And why’s that? Well, during a camel ride in the footsteps of Lawrence of Arabia in Wadi Rum the day before I had suffered some abrasions that burned so badly that I had to jump out of the water in a hurry.

The most impressive depression, however, was the third deepest: Lake Aydinkol in the southern part of the Turfan Depression (154 m below sea level). During one of my tours along the Silk Road I decided to have a look. I convinced my clients that this was a ‘must see’ destination.   A disastrous road led to the shore of the salt lake. At the end was a decommissioned factory that looked worse than one in a Stephen King horror movie. During the Mao era, people were assigned to this wasteland to exploit the lake’s mineral resources. When conditions in China became somewhat more ‘liberal’, those who could, fled this hell. But some workers had apparently not managed to leave this godforsaken place. And it looked exactly as I had imagined: thick clods of earth had been piled up into bizarre formations due to the power of the salt (halokinesis = earth or ground

movements caused by salt). I even met some pretty girls and asked them what they were doing there. Couldn’t get a satisfactory answer, though. The cracks in the clay walls of their accommodation (in contrast to the factory, the salt kept working) were provisionally sealed with aluminium foil; others were decorated with posters of Chinese movie stars or calendars. Compared to that, the working class during the time of Manchester-type capitalism lived downright comfortably. In addition to this the climatic conditions are murderous: a temperature amplitude of (in extreme cases) no less than up to one hundred degrees Celsius – unbelievable! A dog barked madly as we approached his kennel. Somehow I couldn’t help but feel that it would probably end up as a Sunday roast next weekend. Truly one of the most miserable places I have ever seen.