In the late 70s the Thai government had ordered a curfew in Bangkok, I don’t remember why. Between 11 p.m. and 5 a.m. nobody was allowed in the streets of the capital. Those days I stayed at the Atlanta Hotel in Sukhumvit Rd., Soi 2 and Grace Hotel’s coffee shop was my favourite hangout. After more and more people from the Middle East invaded the place I switched to Soi Cowboy. Not that I have anything against them but it seemed to me that they preferred stout girls. Which I don’t. ‘Long Gun’ was one of the most popular places in Soi Cowboy those days. I liked a place with live music not far from Soi 21, maybe the only place where they didn’t play Murray Head’s ‘One night in Bangkok’ permanently. ‘Eye of the tiger’ also seemed to be popular there. Hate those songs … I still have one of the flyers that were handed out by half-naked girls standing in front of ‘their’ bars, shouting “Hey, you sexy man!’. The bar had a wide choice of ‘shows’, ranging from the ‘ping-pong-banana’ show all the way to the ‘pussy rainbow’ show. I found the ‘pussy magic razor blade show’ quite frightening. Imagine a young lady pulling 15 razor blades that are connected by a string out of her vagina … However, I rarely booked a girl at Soi Cowboy because of the ‘bar fine’ which was quite costly. And most of the bar-girls preferred a quickie to a one-night-stand in order to get back to the bar a.s.a.p. 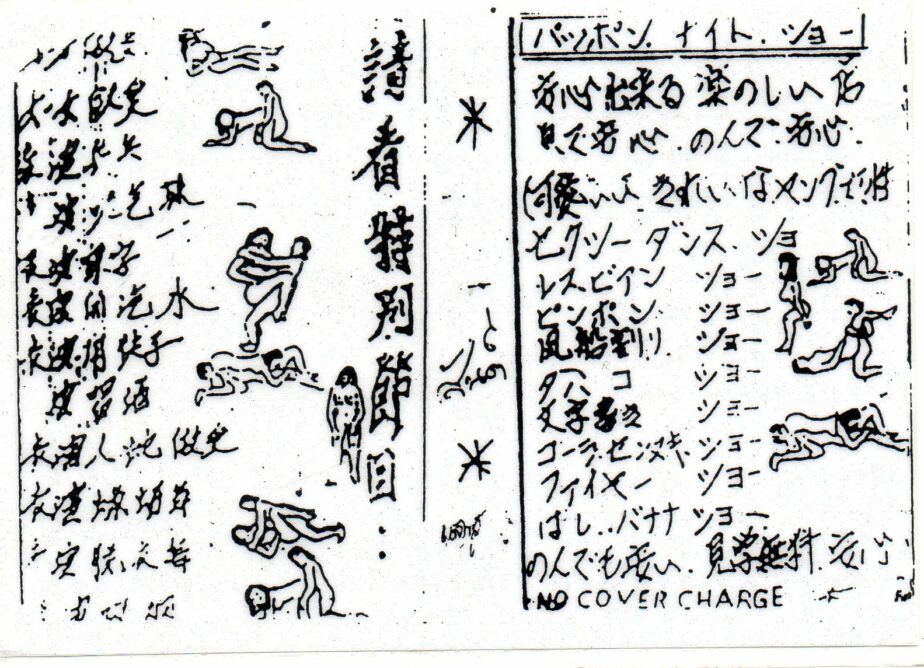 As you may remember, there was quite some haggling with the coffee shop girls about the price for a one night stand before you reached an agreement. The girls usually had several irons in the fire and so did the customers. The curfew played into the hands of the would-be customers as . most of the girls had to leave in time to get home or they had to rent one of the camp beds that were put up in Grace’s disco. 100 Baht a night, if I’m not mistaken. The Atlanta was only a 5-minutes-walk away so we could stay right to the end and make it home in time. Accordingly, the later it got, the more the prices dropped. Today, I’m a bit remorseful for taking advantage of the girls’ situation. On the other hand, being a traveller one usually had limited funds and simply couldn’t afford to be overly generous. For those who didn’t feel like going home ‘early’ there was only place on Sukhumvit Road that stayed open all night – the Thermae! A no-frills pickup place in the basement of a building near the corner of Soi 15. As it was illegal to open after 11 p.m. the customers had to enter through the ‘secret’ back door. A funny place with a Wurlitzer jukebox. Full of girls! Maybe they wanted to save the money for the camp bed or they hoped to be taken along in the morning. I haven’t been to Soi Cowboy for a long time since Nana Plaza opened. But I guess Bangkok’s nightlife is no longer what it used to be in the 70s and 80s …